"Every day that I missed practicing takes me
one day longer to be good."
~ Ben Hogan

How do you practice? Think about it for a moment… are you leaving the golf course better, the same, or worse after each session?

If you don’t know… or your score hasn’t gone down in the past 3 months – you are probably practicing the wrong way.

ALL OF THE GREAT GOLFERS…

ALL OF THEM… use the methods I’m about to reveal to you. If you are looking for the ‘secret’… this is it. 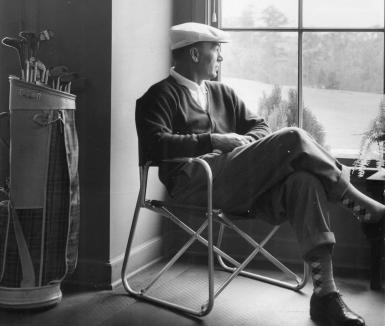 The secret isn’t sexy and it sure isn’t easy… but it’s the TRUTH.

Here is the Consistency Cocktail Formula you should adopt - if you are serious about lowering your score - so you can accomplish your goal efficiently in the most time-efficient way possible.


"People have always been telling me what I can't do.
I guess I have wanted to show them. That's been one of my
driving forces all my life."
~ Ben Hogan


Let's break these down individually now...


I hope to shed a little light on the subject of practice using our Kaizen method that we teach in the Single Digit Blueprint.

If you aren’t familiar with Kaizen, it’s a technique used to overcome the fight or flight thinking our brains undergo when we overwhelm them with the complexity of golf. Essentially breaking the game into bite-sized chunks so you can progress and kill the overwhelm.

Click here to read more about the Kaizen Methodology.


I hope to shed a little light on the subject of practice using our Kaizen method that we teach in the Single Digit Blueprint.

If you aren’t familiar with Kaizen, it’s a technique used to overcome the fight or flight thinking our brains undergo when we overwhelm them with the complexity of golf. Essentially breaking the game into bite-sized chunks so you can progress and kill the overwhelm.

Click here to read more about the Kaizen Methodology.

Now, I’ll give some credit to the Tip of the Day Pro’s… but not much. While they do give you tidbits here and there in bite-sized chunks they really aren’t providing you ANY VALUE AT ALL.

Quite simply they are reckless with their shotgun approach to the game of golf. They are LYING TO YOU when they promise a better game.

You WON’T GET ANY BETTER practicing random sh*t.

Tip of the day shows are addicting because you get excited at the hope of the ONE TIP that’s going to awaken your game.

And that’s where I’ll begin by telling you to STOP falling for the magic pill approach. It DOESN’T WORK.

Here’s what does work…

INGREDIENT #3 – BUILD YOUR OWN BLUEPRINT BASED ON YOUR OWN GAME

A blueprint that covers a sound foundation and works its way outward.

A Blueprint BUILT AROUND YOUR OWN STRENGTH'S AND WEAKNESSES.

Forget about backswing positions and how to begin your downswing… that’s right, FORGET THEM!

The game begins from the ground up… and that’s where you should build your game from… every aspect from irons to drivers to wedges to putters and sand shots… it all starts at the ground and works up from there.

…and I know that’s not you, or you wouldn’t have read this far.

When I dropped my golf scores over 6 months when I was a teenager, it was because I dumped the "Tip of the Day" mentality and followed a blueprint.

My blueprint focused on Ben Hogan’s Five Lessons… and wisdom from Harvey Penick and Jack Nicklaus.

I built my blueprint focusing on painstaking attention to my grip, my stance, my alignment. THE BASICS.

I put tape on my bedroom floor and I practiced my setup and alignment over and over again. To this day, I do the same thing... but use alignment sticks now.


What occurred over that six months was magical. My score began to drop, my shots narrowed closer to the target, my confidence grew, and I got BETTER.

Take The Scoring Leaks™ Quiz. Learn Where To Start So You Can Quickly Drop Your Score.

The Wise and Foolish Builders


The only rule I had was that I must be able to MASTER or come close to MASTERING the task at hand. To be real, I wasn’t striving for perfection. I was striving for a full understanding of what it felt like, what it looked like in a mirror, and how I could groove a smooth swing.

I was not allowed to graduate until I had basic mastery of the fundamental I was working on.

If you suffer from SOS (Shiny Object Syndrome) you will find this particularly difficult… and one of our authors on Golf Aggressive struggles with this even today… I won’t mention any names, but Robert Phillips struggles with staying on task to improve.

It is human nature to want to more exciting things in golf… however, this is EXACTLY why golfers never break 90 or 80… or even 100! It's also the #1 reason golfers are frustrated with where they stand.

Quite simply, the basics must be mastered and revisited at the beginning of each session if you want to get better at golf.

Just remember to build your game on rock, not sand.


When thing’s go in the sh*tter it’s time to regress and go backwards.

The best approach is to start from the very beginning all over again. Check your grip, posture, stance, weight balance, alignment… once the foundation is solid hit a few shots.

It’s important you build a benchmark for yourself. When you are striking the ball well, have a record of your setup, your grip, your alignment, your takeaway and so on.

I actually keep notes on my phone when I’m striking the ball well. Filled with the feels and mental cues I am using that day.

Essentially, you are building your game from the ground up… and when you are struggling you return to the beginning.

If you don’t know what those fundamentals should look or feel like, hire a PGA Pro for a session or two to line you out. Record the lesson and watch it back later until it all becomes second nature… or take the Scoring Leaks™ Quiz and learn where you should start.

"Muscle failure is more than unnecessary – it is counterproductive! Neuroscientists have known for half a century that if you stimulate a neural pathway, say the bench press groove, and the outcome is positive, future benching will be easier, thanks to the so-called Hebbian rule. The groove has been 'greased'. Next time the same amount of mental effort will result in a heavier bench. This is training to success! The opposite is also true. If your body fails to perform your brain's command, the groove will get 'rusty'. You are pushing as hard as usual, but the muscles contract weaker then before! To paraphrase powerlifting champ Dr. Terry Todd, if you are training to failure, you are training to fail." ~ Pavel Tsatsouline


I learned Greasing the Groove from a Russian Special forces trainer named Pavel Tsatsouline. Pavel learned GTG from the Hebbian Rule… and by applying it to the special forces he trained.

If you aren’t familiar with GTG, it’s a technique used to program our mind to perform a movement with almost robot like precision. Essentially we break down the swing, chip, putt, pre-shot routine... whatever... into bite-sized chunks.

Click here to read more about Greasing The Groove.


It goes without saying that you should be taking care of your health.

As a serious golfer, health is crucial to enjoyment of the game. If you are overweight or haven't taken care of your body - you know this to be true.

I won't say much here other than you should be doing a morning flexibility routine at the very least and have a healthy diet. If you are interested in learning Golf Specific Workouts, Nutrition, and Flexibility.

If you are tired of tips and quick fixes from "Tip of the Day" Pro's, take my Scoring Leaks™ Quiz. You'll discover exactly where you should focus - eradicating the 'Low Hanging Fruit' first.

In fact, not only will you know where to start... I'll teach you how to use my Force Multiplier System™ for the fastest amount of results in the shortest amount of time.

I've only seen elite golf pro's teach this... the one's with waiting lists and $500/HR lesson rates. And you sure as hell won't get anything like this from a "Tip of the Day" or "Quick Fix" pro.

There's no obligation to take the Scoring Leaks™ Quiz and you'll be given your starting point in 90 seconds or less.